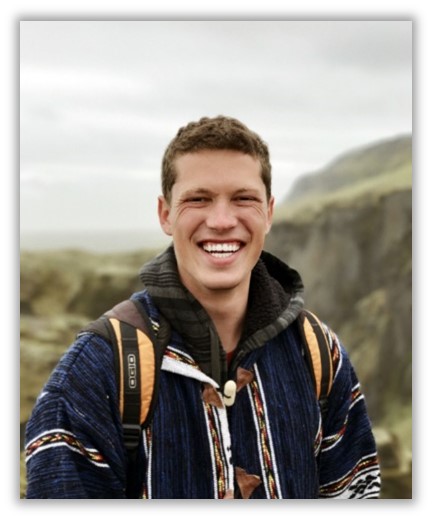 The tragic death of our colleague and friend Alex Braun has come as a huge shock to all in iCRAG and the Irish geoscience community. iCRAG extends our sincere and heartfelt condolences to his mother, Virginia, brother, Eric and partner, Lucia and wider family and friends. Alex was a much-loved colleague of everyone at iCRAG, being particularly close to our researchers both in UCD and NUIG. Working with Prof. Mike Long of UCD Civil Engineering, and Peter O’Connor of Apex Geosciences Ltd., Alex had just completed his Masters research on the creation of tools that can be used by geophysicists to enhance the accuracy of mapping karst features for road construction. As a colleague and a friend, Alex’s warmth kindness and generosity stood out to all in iCRAG. Alex will be sorely missed by all at iCRAG and we are heartbroken at this news. Ar dheis Dé go raibh a anam dílis.

Alexander Crockett Braun, 26, died of injuries sustained while hiking in Ireland on July 1.  Born Sept. 18, 1994, in Missoula, he was the son of Virginia Vickers Braun and the late Eric R. Braun.  In 1997, at age 3, Alex moved to Lima, Peru, with his family, where his father was manager of a geological exploration office.  Alex grew up bilingual, but his preferred language was Spanish.  He attended Colegio Leonardo da Vinci in Lima until midway through the 5th grade, where he created exceptional works of art for a child his age.  An outstanding athlete, he enjoyed playing futbol (soccer) and tennis. After moving back to the United States in 2005, he won the Western Montana Boys’ 12 singles tennis championship at age 10 and went on to win numerous state and Intermountain tennis titles.  He attended Missoula’s Sussex School in the 7th and 8th grades.

Alex played tennis for Hellgate High School, where he was an honor student.  As a freshman in 2010, he and his brother Eric, a senior, won the Montana State doubles championship, fulfilling a dream they had always had of playing together.  In 2011, he won the Boys’ 16 singles, the Boys’ 18 singles, and the Men’s Open at the Western Montana Open Tennis Tournament.  During the summers, Alex taught tennis for Missoula Parks and Recreation and then taught back East, first at the Kent School in Kent, Conn., and later at the Windridge Tennis Camp in Burlington, VT. He played tennis for the University of Montana Grizzlies his freshman and sophomore years and graduated in December 2016 with a major in geology as a Global Learning Fellow.

Always an adventurous spirit, Alex set out to explore the world on his own after graduating six months early.  Starting out in Vietnam, where he worked on a water quality program as part of his studies at UM, he eventually ended up in Europe, where he was joined by his family for a memorable vacation at the 2017 French Open in Paris.  In addition to his love for playing tennis, Alex loved the outdoors and enjoyed hiking, backpacking and skiing.  He had a wonderful sense of humor and treasured his friendships above all else. Compassionate by nature, he had a very moral character and volunteered for three years as a basketball coach for Special Olympics during high school.  “Alex never said an unkind word, and was always so positive and charming,” said the mother of a close friend.

Alex began his career in geology learning about grassroots exploration with La Cuesta International in Oregon and Nevada.  In the summer of 2016, he had an internship with Pucara Resources Corp. and Bear Creek Mining, working in the Peruvian Andes.  He worked as a wellsite geologist for Selman & Associates in Midland, Tex., in 2017 and for more than a year as an exploration geologist for Northern Vertex Mining in Bullhead City, Ariz. Wanting to broaden the scope of his studies, he received a full-ride scholarship to study geological engineering at University College in Dublin.  Alex completed his master’s degree in geological engineering in April 2021 and was weighing job offers in Spain and in the United States when his life was tragically cut short.

Survivors include his mother, Virginia, and brother, Eric, of Missoula; partner Lucia Lozano Salcedo of Toledo, Spain; beloved family dog Rudy and cat L-Belle; aunt, Sally Vickers Foster of Rome, N.Y.; cousin Paul Mills of Southbridge, Mass., numerous other cousins and all of his friends around the world.

A gathering to honor Alex will be held at a later date.  Those wishing to make a donation in his memory are encouraged to support Special Olympics Montana or the humane society of your choice.