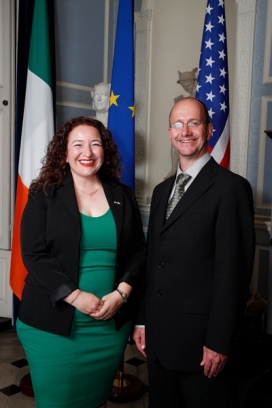 As a Fulbright-GSI Geoscience Scholar, Aggeliki will visit the USGS Woods Hole Coastal and Marine Science Center in Massachusetts to investigate in detail the structures, morphology and lithologies of submarine landslide scars using diving equipment video data and Structure-for-Motion Techniques.

Submarine landslides are voluminous remobilisations of slope sediments, that for the North Atlantic margins that are categorised as passive and tectonically “quiet”, they can be the primary cause of tsunamis. Understanding the mechanics of submarine slope instability is therefore critical in assessing the tsunami risk in the North Atlantic and beyond. The Fulbright funded research will help:

Aggie is a Marine geologist, graduated from the Department of Geology at the University of Patras in Greece, came out of the University of Southampton with a M.Sc. in Oceanography and then a Ph.D. at the National Oceanography Centre, Southampton (UK). Her Ph.D. thesis was on submarine gravity flows (slides and turbidity currents) south of the Canary Islands offshore NW Africa.  In 2006, she joined the 3D Lab at Cardiff University as a post-doctoral research associate and was a member of the industry-funded CAPROCKS consortium.