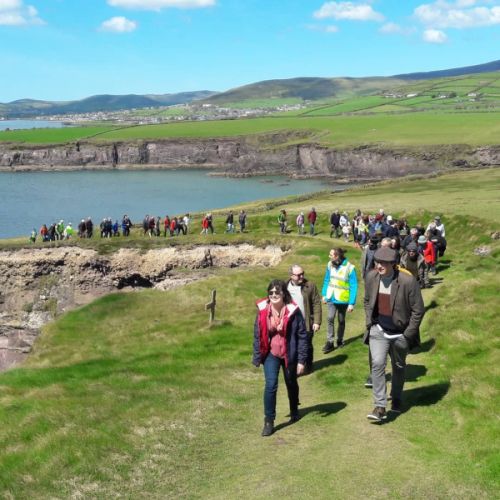 Attendees at the "Strolling Through Time" event.

On Saturday May 4th the group facilitated two events, a guided walk and a poetry workshop. The day began on Been Bawn beach in the early afternoon with Strolling through time: geology-meets-poetry landscape walk which saw our researchers guide a group of approximately 80 festival goers on a scenic walk along the edge of the Dingle Peninsula. The event offered attendees a unique journey through the geological history of Dingle, using both a geologist’s eye and a poet’s verse, as the geologists of the group highlighted geological features of the area of the area, and explained the processes by which the peninsula was formed. Interspersed with these informative presentations were several poetry readings delivered by Prof Stephenson, who recited works by Heaney, Yeats and Hughes to name but a few. The backdrop to both presentations was the spectacular Kerry coastline, bathed in glorious sunshine with jagged cliff faces clearly visible surrounded by glimmering blue sea and rolling green hills, and uninterrupted views of Valencia, Skellig Michael and An Fear Marbh.

Later that afternoon, the group re-convened, quite fittingly, in the science room of a former primary school on Goat Street for the second event, Inspired by the land: the science of poetry talk and workshop. Here, Prof. Stephenson delivered a short talk on how poetry and scientific research can inform one another, before the assembled group tried their hands at creating poetic works of their own. Beginning with a “list poem” which invited participants to list their responses to particular parts of the landscape, the attendees then moved on to creating “cut up poetry”, a technique favoured by David Bowie and William Burroughs, which entails mixing prompts and responses to create descriptions of the landscape both literal and metaphorical. Through this the group honed their poetic responses to the geological and geographical environment in which the festival took place, and had a thoroughly enjoyable afternoon doing so.

After the close of the workshop, it was time for the iCRAG contingent to leave Dingle, and immediately begin looking forward to next year’s event!