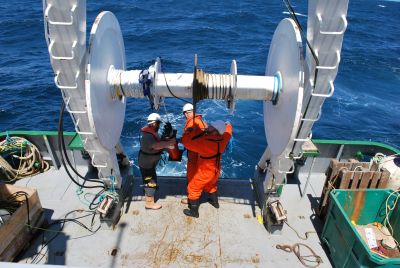 Monday 14 December 2020: The noise of bottom trawling in or near underwater canyons can disturb protected mammals such as fin whales and beaked whales in important feeding grounds and along migratory paths, iCRAG researchers have revealed.

The team based at iCRAG, the SFI Research Centre for Applied Geosciences in NUI Galway’s Ryan Institute, used hydrophones to record the impact on the marine environment of working trawlers in two surveys in the Irish Sea and Celtic Sea.

Lead author on the study, Eoghan Daly, iCRAG PhD researcher with Earth and Ocean Sciences at NUI Galway’s Ryan Institute, said bottom trawling noise can be amplified in the sea to levels that could cause disturbance to marine life.

“Human-derived noise in the world’s oceans comes from many sources, including shipping and exploration. Bottom trawling, the noise it creates and how it spreads in the sea, has received little attention to date.

“Submarine canyons are similar to those on land and serve to channel the noise from nearby trawling due to their shape and rapid change in depth compared to nearby slopes.

“In an ocean already faced with plastic pollution and climate change, a better understanding of trawler noise pollution will highlight it as another human impact on the marine ecosystem.”

The research findings have been published in the Marine Pollution Bulletin.

The iCRAG team modelled how the noise generated by bottom trawling travelled through the water column, along the seabed and through a 20km long submarine canyon in the Porcupine Basin on the continental margin, off the south-west coast of Ireland.

Analysis showed that the noise is focussed through underwater canyons and is carried to deeper waters, having a potentially harmful effect on the marine environment and the protected mammals which feed in them and migrate through them.

The team also found that modelled trawler sound generated on the seabed travels underwater more efficiently than sound generated at the surface by boats, adding to the potential for trawling to have a negative effect on the surrounding marine environment.

The research team hopes that their findings can contribute to better environmental regulations surrounding bottom trawling in the vicinity of key marine habitats, Marine Protected Areas and potentially for any additional Special Areas of Conservation within Irish waters, in line with government plans to expand protected areas in the future.

“Areas such as the Porcupine Basin and the wider European continental margin are ecologically sensitive and trawlers operating in this part of the Atlantic Ocean have more powerful engines and heavier gear.

“The enhanced currents and nutrient mixing in these parts of the ocean helps create good conditions for cold water coral mounds and for associated invertebrates, fish and mammals to thrive. Marine life should be protected from the wide variety of pollution sources, including ship noise, pile driving and from bottom trawling, as we now know.”