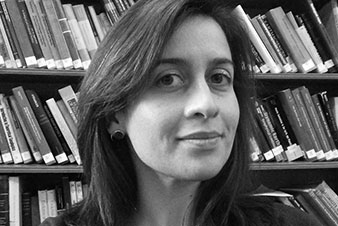 In the third of a series of feature interviews with iCRAG researchers, iCRAG PhD Researcher Clara Gomez Garcia speaks to Dr Anthea Lacchia about her passive subsurface imaging research in iCRAG, seismology and her love of a particular Spanish poet.

What brought you to Ireland?

After my masters, I worked on seismology research related to ambient noise in the Institute of Earth Sciences Jaume Almera in Barcelona. Then, I received a mobility grant from one of the European COST actions, TIDES (Time Dependent Seismology), to go to Grenoble in France, where I kept working on ambient noise. Then I went back to Barcelona for a time before starting my PhD here in iCRAG. I had visited Ireland and Dublin a few times before moving here, and I really like this country. When I saw my current PhD position advertised, I thought it was a very good opportunity as I would be doing science in a very interesting field and in a nice place, so here I am.

I think it was by chance. I studied physics in Complutense University of Madrid, and then obtained a master’s degree in meteorology and geophysics, two subjects I really liked because when you study them you are, actually, studying the Earth itself! My master's thesis was on rock magnetism and involved spending a lot of time in a lab. I knew I would like to do something where programming is involved but also something practical where I have the chance to go outside into the field. Seismology is a good compromise.

You are based in DIAS (Dublin Institute for Advanced Studies), which is housed in a beautiful, historic building on Merrion Square in Dublin. What's it like working there?

I really like it. All the people in my office are part of the same working group and the atmosphere is fantastic. We are fewer than 50 people [in DIAS] and we usually meet twice a day. Sometimes we just want to relax over coffee, other times we discuss our research problems. In the office, I just have to turn my head and ask a question - it's great!

What are you working on now?

My project is all about generating images of the subsurface in the crust onshore Ireland, on a scale from tens of metres to kilometres. Continuous interaction of processes in the ocean and atmosphere with the ground generate vibrations in the subsurface; the same is true when we walk or when a car is moving along a road.

We [as seismologists] take advantage of all these vibrations, which produce a signal known as seismic noise. I’m using seismic noise to study the physical properties of the crust. Specifically, I’m using all available seismic sources, such as quarry blasts or earthquakes, and checking if they can be used to generate seismic images of the subsurface. These range from images of seismic discontinuities (which are boundaries between strata and between crystalline layers in the crust) to seismic-velocity distributions.

Compared to active seismic techniques, which make use of induced vibrations or explosions, passive source (the method we’re using) is much cheaper, but the resolution of the images you get is lower for reconnaissance surveys. One of the aims of my project is to explore whether, with passive methods, I can get a resolution as high as with active methods.

I am also doing a lot of fieldwork lately. My project is linked to Tara Mines, where we are testing our methods with 21 seismic stations in a 5x5 km area. We do a maintenance service there every month to collect data and check everything is working properly.

What do you like to do in your spare time? Do you have any hobbies?

I love being outside: climbing, hiking, running, and doing sports in general. I like reading as well: I have recently finished the anthology and biography of a Spanish poet, Gloria Fuertes (1917-1998). She wrote poems for children, amongst other things, and I loved them when I was young. I also started reading a historical novel called You are not like other mothers by Angelika Schrobsdorff. It’s about the mother of the writer and is set before, during and after the Second World War. It's very interesting. This woman broke with many conventions in the 30s and 40s but was eventually confronted with the realities of war.

Do you hope that your research will make a difference in the world and how?

It's a difficult question. I think a lot about this. When you’re doing a PhD, you are focused on something super specific, so you can easily lose track of the real world. I think that's one of the reasons why I chose seismology: it doesn't let me be truly disconnected from reality. In addition, I get to work on physics and science and to spend time outdoors, all things I enjoy. I do think about how my research can relate to people. For one thing, the project I am working on employs cheap techniques, and if you obtain higher resolution maps of the shallow subsurface, you can for example, better assess the risks associated with a particular area. Both local people and industry can make use of these data.