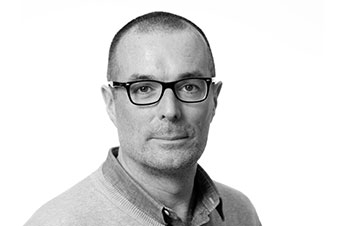 In the second of a series of feature interviews with iCRAG researchers, iCRAG Funded Investigator Dr Tiernan Henry speaks to Dr Anthea Lacchia about his groundwater research in iCRAG on water quality from mines, the links between geology and the arts (Tiernan is a former Chair of the Galway Arts Festival after all) and the importance of reading the landscape.

I completed my undergraduate degree in Trinity College Dublin and then worked in Dublin for a few years. After that, I went to the USA. I was playing on a football team in Minneapolis and one of the guys on the team was a hydrogeologist. After the game we were talking, and I thought his work sounded really interesting. I ended up doing an MSc in hydrogeology in Madison, Wisconsin. I have been working in hydrogeology ever since.

What's the aspect of your current work you enjoy doing most?

I really enjoy teaching and love doing research, and that mix keeps both fresh I think. We [in NUIG] try as much as possible to do research-based teaching. Obviously there is theoretical stuff that the students need to learn, but we try to sit that in a research context so that students can see an application. [...] I really like the fact that I can wear shorts to work and that I have a nice office, of course! But really, I like that my work is office-based but I also get to go out into the field. An idea of mine, and I will try to do this, is to teach a 4th year hydrogeology course entirely as a field course.

Is there an aspect you enjoy least?

University admin. Given the state of the Irish economy, we're working in an environment that is in recovery, but we're still doing a lot more that we were prior to the crash. There are a lot of demands on our time, and a lot of the demands seem to be around what we do rather than related to what we do. But it's a minor complaint.

Do you have tips for early stage career researchers on succeeding in the modern academic environment?

Go to lots of conferences and talk to people. One of the really good things I found when I started working in hydrogeology was meeting other hydrogeologists, making those contacts in formal and informal settings, because that's when you really start learning. Get out there. In an Irish context, IGRM (Irish Geological Research Meeting) and IAH (International Association of Hydrogeologists) conferences are really good, and the iCRAG summits have been really useful as well.

What research questions are you thinking of at the moment?

We are looking at water chemistry data from mines. Very crudely, we're treating the mines like very big wells - water moves towards them and is collected underground. One of the things we're curious about, particularly in an Irish setting where so many mines are in carbonates (they sit in limestone) is whether there are subtle differences in the water chemistry as water moves through the rock towards the mine. This information could be used to distinguish, for example, water coming from the east from water coming from the west. Where does the water come from, what has it been in contact with, how long has it been underground and how far has it travelled over ground? These are key questions we're pondering.

One of the other big questions we've been working on for a number of years is about what happens on the south Galway coast in the karst coastline, specifically around the interaction between salt water and fresh water in a karst coastal setting. A big question there is: how do you define a coast in a karst setting? It's very simple across Galway Bay on the granite because the surface water stays on the granite and runs into the bay, so you're on the granite or in the sea. But on the other side of the bay there is movement of freshwater out into the bay through submarine groundwater discharge, and there is also seawater pushing in underground into the land. The question is: where is the coast?

If you could spend just one day doing fieldwork in Ireland, where would you go and what would you do?

Dugort, on the north side of Achill Island. I'm involved with a project that is looking at calcareous dune structures known as machair dunes there. We are interested in how the dune structures form, how they behave, and how groundwater moves under them. Dugort is a really nice place to go. The drive around Clew Bay and up into Achill Island is brilliant. That part of Ireland is fabulous and really unspoilt - I highly recommend a visit.

You've written and spoken about geology many times over the years while engaging with the general public. Do you think public engagement is important?

Absolutely. One of the things I really like about it, for instance in the field of groundwater, is that you learn so much from anecdotal information that people have. It's citizen science. [...] When you can talk to people and have a discussion about a location and marry their experience and knowledge with the different types of knowledge we have, I think it benefits everyone. They learn more about their place and we learn more about their place as well. One of the things we say to our undergraduate students is: the landscape wants to tell you a story. So the question, also when we engage with the public, is: how do we get the landscape to talk to us?

I used to work in the mining industry and as a kind of general rule mines didn't like either good news stories or bad news stories, they just liked no news at all. Even mines that were doing really good things just preferred not to say much about it. One of the things we need to do is talk a lot about what we do. Certainly within iCRAG there's such a vast array of research being done and it's all so important to Ireland from an economic and cultural perspective, that I think we do need to talk about it. Scientists sometimes tend to steer away from engagement around contentious issues, because to a point it's a no-win situation: there's no point in getting into a shouting match with someone, or if someone is convinced that x is wrong or that y is the only way we can do something, it can be difficult to engage with that person without it being seen as either talking down to them or ignoring their concerns. Maybe sometimes we need to listen a little bit more. People have genuine concerns.

Talking about public engagement, you were involved, for example, in the Galway Arts Festival. What do you think about the interaction of art and science?

When I came to Galway, I got roped into helping at the Galway Arts Festival. Over the years, I got more and more involved - I was on the board and then I was the chair of the festival for a number of years. Now I'm back to being a ticket buying member of the public. It's great fun. You meet really interesting people and get to see, engage and get involved with things that you wouldn't on a regular basis. I've always been curious about C.P. Snow's 'Two cultures' [art and science], but it only seems to work one way: I was listening to the radio and there were a couple of people talking about poetry and art - both of them unapologetically said 'I know nothing about science'. I know lots of scientists who know about art and I know lots of artists who do know about science. Art is a great way of communicating with people, whether it's visual, performance art or music, and there's some amazing writing about the environment and landscape and when you read it you think: this is really good art, really good writing, but there's some really good communication as well. It's about the use of imagination. It's not about definition, or about x plus y equals z; I think it's almost about fooling people into learning about science. You're talking about something and they realize they've learned something and started to get curious about it.

What is the last book you read?

I am rereading John McPhee, an American writer who I think had the best job in the world: he drove across the USA with geologists and wrote about it for The New Yorker. He's not a geologist but his descriptions are very factually correct; he writes in such a clever, imaginative way, you can't help but be drawn in. And I just bought two books today: Equipment for living: On Poetry and Pop Music, by Michael Robbins, and Reading the Rocks: The Autobiography of the Earth, by Marcia Bjornerud. At the moment I'm also listening to blues and country recordings from the 1920s from a CD set called American Epic.

Do you envision your research as making a difference in the world?

I would hope that the work we are doing would have a positive impact on how we manage our water resources. It's not E=mc2, but it's important work and it's important to do it right. In Ireland, until relatively recently we didn't think about our water all that much because we had so much of it. Now it is something we are thinking very hard about in terms of water quality and water quantity and how we allocate it. I think it's important that as much as possible we ensure that the decisions that are made are based on good science. In that sense I would see what we do as very important.

Where do you see yourself in 10 years?

I'd still like to be working and teaching. We've just started a discussion with some civil engineers as part of geotechnical research within iCRAG, which I am curious about. I think that to broaden the definition of what we [as geologists] consider geoscience and draw in and interact with engineers [in our research] will be really interesting.