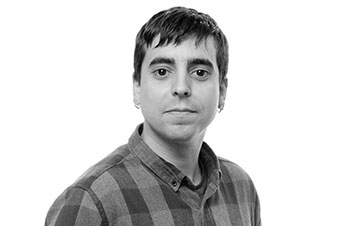 In the first of a series of feature interviews with iCRAG researchers, our Spanish seismic superman Pablo Rodriguez-Salgado speaks to Dr Anthea Lacchia about his current research in the Celtic Sea, the joy of fieldwork and the philosophical, Joycean aspects of life outside of research.

What are you working on at the moment?

I am working on seismic data from the north-western sector of the Celtic Sea, which means I am looking at images of what’s under the sea floor. With seismic, we get an image of the shallowest part of the Earth’s structure, say the uppermost 5 km, using sound waves. It’s similar to radiography: you get an image of something you can’t get access to and you need to interpret it.

In particular, my colleagues and I are studying folds and faults and trying to reconstruct what happened in the Earth’s crust, starting from the break-up of Pangea, about 250 million years ago, up until the Alpine Orogeny which caused the uplift and rise of the Pyrenees and other mountain belts.

What research questions interest you most right now?

Within my PhD research, some of the research questions I am most interested in are about inversion structures, which are a combination of reverse faults and folds: how they grow and how they evolve. Today, when we see rocks affected by faults and folds, we see the final product of something that happened in the Earth’s crust over millions of years and it reflects part of its global geological history and evolution. One of the key questions is: how did the faults evolve? Offshore Ireland is a great natural lab for looking at these features, especially related to the Alpine Orogeny.

I used to go hiking with my father in the Pyrenees when I was younger, and I always liked playing outside. As I grew up, I started falling in love with the mountains. I guess that’s how it started.

Where did you study and what brought you to Ireland?

I studied geology in Univesitat Autónoma de Barcelona and did an MSc in reservoir geology and geophysics in University of Barcelona. Then I got the opportunity to work for Shell in the Netherlands for one year, doing research about the Pyrenees. We were creating numerical models to simulate processes such as how a river transports sediment.

One of my colleagues forwarded me the iCRAG advertisement and I applied. Before coming to iCRAG, I always worked within sedimentology and related fields, and I think I had a lack of knowledge around faults. UCD is one of the best places to study faults because of the presence of the Fault Analysis Group, who collaborate with us in iCRAG.

Where was the last place you did fieldwork?

The Pyrenees. I was there with a colleague from Barcelona and we were looking at nice structures related to salt, called salt growth structures. Salt has a very low density, so when you have a rock that’s very heavy, or a pile of rocks, on top of salt, the weight of the rock makes the salt try to move up like toothpaste. This process usually happens very slowly, so you have sediments that are deposited at the same time than the salt is moving and deforming the overlying rocks. Therefore, a close look at those sediments can tell us very interesting things about the salt-induced deformation processes. These sediments are deposited defining what is called growth structures and I see them in seismic data too.

When you are working with seismic you don’t have outcrops and the scale of observation is usually too big (i.e. some of the seismic datasets cover areas greater than Ireland!), so it’s very important to go out into the field as much as possible and imagine what the rocks would look like in seismic. These are like our flight hours: going out into the field and looking at real rocks!

Thinking about success and failure, were there times when you failed at something you felt was critical to your path?

I guess we always fail at something, and failing in our job is very important. It’s how we learn and how science works. This will bring you to study different aspects in different ways and that’s how knowledge develops.

Before getting this position in iCRAG, I applied for at least three PhD positions in the UK and was not successful. However, after getting the position here, I learnt that when you don’t get something you were hoping for it means that you can get something else, maybe an even better opportunity.

What do you like to do in your spare time?

Any idea where you will be in 10 years?

Hopefully not in a remote country doing my 5th postdoc! I would like to find a position as lecturer in a university because I like teaching, but I would also really like to keep doing research and studying different areas of the world. But having a stable job would be nice sometime, by the way!

Do you envision your research as making a difference in the world and how?

I see my research and all geology research as driven by curiosity. We have questions and the answers always generate more questions. It’s addictive. The answers can have an impact but this depends on the results you get. The aim is to generate knowledge and in iCRAG we are certainly doing that – providing knowledge to Irish people about Ireland’s geology. A country has the right to know about its resources and geology. That’s independent of what it chooses to do with this information. In iCRAG, we are generating very nice maps and models about Ireland, the geological history of Ireland, and how the rocks are distributed onshore and offshore. That’s knowledge for the country. Then, it’s up to a given country’s people to decide what to do with that knowledge.

What was the last book you read?

I recently finished Dubliners by James Joyce. I liked it and I remember one of the chapters tells the story of some kids who are cutting school and there is a sentence there which reminds me of travelling and finding a job abroad: ‘Real adventures do not happen to people who remain at home’.

The other book I finished is Fora de classe by Marina Garcés, a philosophy teacher. It is about the philosophy of learning. Philosophy is very important in research because it provides information on the mechanisms through which we acquire knowledge. I think it should be integrated into the science curriculum at university.