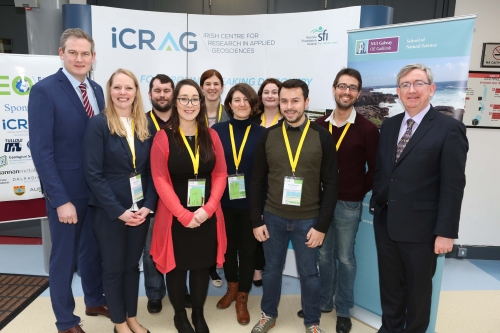 The event secured support from all sectors of the geoscience community and received sponsorship from a wide variety of sources including hydrocarbon and raw materials companies as well as the Petroleum Affairs Division and the Geological Survey of Ireland from the Minister's Department.

The Minster stated "The objectives of iGEO2018 fit with my Department supporting the encouragement and development of early-career geoscientists, including geoscientist's entry into the research, mineral and petroleum sector and therefore the development of capacity in Ireland for all the geoscience sectors."

A recent report from Indecon International Economic Consultants on the Sectoral Economic Review of the Irish Geoscience Sector, that Minister Kyne launched in November 2017, concluded that the Economic Review puts a value of €3,277m on the overall Economic Impact of the sectoral outputs for 2016, across the areas of Geotourism & Geoheritage, Groundwater, Extractive Industries, Geoscience Research and Geohazards and directly and indirectly employs 24,739 individuals.

The Geoscience sector has very practical and important applications. The Geological Survey of Ireland, for example, is leading a groundwater and turlough project which is studying and analysing flood problems, including at several dozen sites in Galway, Mayo and Roscommon. This information and analysis is contributing to the OPW's CFRAM programme which is of huge importance to many communities.

The Minister further added "The inaugural symposium of iGEO2018 offers an organised structured event and I am pleased that it is so well attended."  The Minister wished the attendees success in their chosen geoscience career and said that it was an exciting time to be involved in the sector.

Minister Kyne's presence gave a strong message that the development of early career geoscientists is highly valued here in Ireland.  He stated "There is a great necessity to develop Ireland's economy on a broad and sustainable basis and  I am delighted to support the need to foster and develop the next generation of Geoscientists."