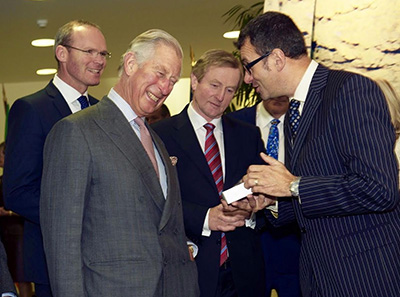 During Prince Charles’s May 2015 visit to the Marine Institute in Galway, iCRAG PI Prof. Andy Wheeler gave the prince a gift of a cut and polished fossil coral with a poignant personal message. The coral presented to Prince Charles is a Siphonophyllia samsonensis, also known as the horn coral, and is a large solitary rugose coral which can grow up to nearly a metre long. Now extinct, these corals thrived in the warm shallow tropic seas in the lower Carboniferous (Asbian, upper Visean) between 333 and 337 million years ago and are well exposed in Co. Sligo.

Prof. Andy Wheeler is the Professor of Geology at University College Cork and has been involved in ocean exploration for many years. He was meeting HRH Prince Charles and the Taoiseach at the Marine Institute Headquarters to show findings from a deep-sea volcanic system discovered during an Irish-led, Irish-British Expedition to the mid-Atlantic Ridge.